How an art gallery trip turned into an unexpected walk through real Florida—magical, wild, peaceful Big Cypress— and changed a writer forever

In 2004, hurricanes savaged the Gulf Coast. Charley, Frances and Ivan cut deadly swaths across Florida. Though the roof of our 1968 house on the Intracoastal had been mauled and we were evacuated from our home twice that year, our community in Clearwater Beach was mainly safe. My husband Jeff and I were relatively new to the area, Northerners transplanted respectively from Detroit and New York City. We’d both had our ideas of what Florida was when we moved here—sundrenched, awash in margaritas, set to a Jimmy Buffett soundtrack. But I remember that season as the year the real Florida introduced itself, awing us with the raw power and force of storms that bent trees, lifted houses and left gigantic highway signs crumpled on the side of the road like discarded tissue.

Later that same year, Jeff and I spent a weekend in South Beach—eating, dancing, lazing on the beach. We were headed home on Old Tamiami Trail when we remembered our friend Jeff Klinkenberg, iconic Florida writer, telling us about Clyde Butcher’s Big Cypress Gallery, nestled in the heart of the Everglades. We’d long been fans of Butcher’s stunning black-and-white images, so we were eager to drop by—our only intention was to buy some art and maybe meet the artist, who was often there. We were somewhat foggy-headed from our debauched weekend, which might account for what happened next.

The only things you expect to find in the shoulder of Old Tamiami Trail are alligators sunning themselves. So, we were surprised to find the area around Butcher’s isolated property lined with parked cars. The day was blue and hot, and towering cumulus clouds piled in the sky like mountains. We parked in the shoulder and walked the distance to the gallery.

My memory of how things unfolded is spotty, as is often true with extreme experiences. We’d stopped at a gallery to buy art, a very civilized and in-character thing for me to do. I suspect it was my husband, adrenaline junkie and adventure traveler, who steered the experience. The next thing I knew, we were signing up to take a “swamp tour”—Clyde Butcher’s Swamp Walk, a two-hour trek through a “rare dwarf cypress prairie and exotic cypress strand.” Just weeks earlier, I’d watched Adaptation—where Meryl Streep’s character wades through the Fakahatchee Strand looking for the rare and elusive Ghost Orchid—and now I thought, what kind of a stupid maniac walks through the Everglades?

But there I was, locking my keys and cell phone in a locker provided by the staff “so nothing got wet.” Why would anything get
wet on a trail? Are there trails? An airboat? I wondered, as the guide began wading into the swamp water and we all followed. 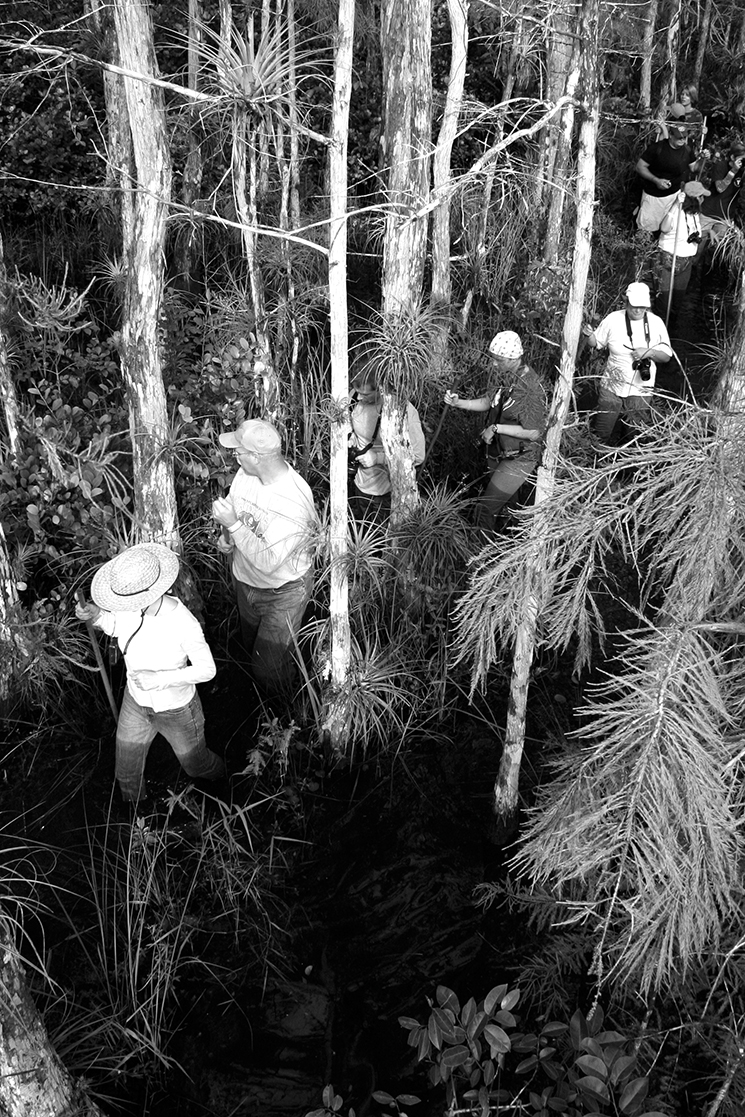 A group of Swamp Walkers getting enlightened in the Big Cypress National Preserve; photography by Niki Butcher

I was wearing a pair of Nike athletic pants and sneakers, in case you are curious. No waders, or rubber boots. My husband was wearing shorts and sandals. The phrase “wildly unprepared” comes to mind. Yes, there was a moment of panic: “Oh my goodness! What are we doing?” But as we moved into the crystal-clear water of what Marjory Stoneman Douglas called “a river of grass,” a deep sense of peace and awe settled me. The stunning blue of the sky, the feel of the moss bed beneath my feet, the towering cypresses, and the hush of an ancient and sacred place washed over me.

“What about alligators? Snakes?” one timid spirit in our group asked our knowledgeable guide. “Honestly,” he said, “it’s so quiet here normally that when the crowds descend, everything mainly scatters. But watch out for those alligator flags.” He pointed to a gathering of broad green leaves that did indeed peek up from the water like flags. “That’s a nest where the gators sleep. You don’t want to step on that.”

Clyde Butcher is a passionate environmentalist; his photographs of Florida’s wild places speak to his fierce love for the delicate and endangered environment of this often-misunderstood place. His swamp walks are intended to share his magical home, so that others might be inspired to respect and preserve it as well. Certainly, because I did a thing I would never have imagined, I came to know the Everglades in a way I never had before.

Water, which I always imagine as dark and thick, was as clear and clean there as anything that might come from a tap. The Everglades truly is a river, whose water is filtered by the fast-growing sawgrass. A place I’d always thought of as frightening and dangerous was one of the most peaceful and inspiring I’d visited. A two-million-acre wetland ecosystem that reaches south, from central Florida to the Florida Bay, the Everglades is home to the endangered Florida panther, more than 350 species of birds, a great diversity of plants and trees—including cypress, mangrove, pine, hardwoods and orchids, among others—and yes, American alligators and crocodiles. In Everglades National Park alone, there are over 27 species of snakes. Surrounded by Florida’s burgeoning developed areas, the Park is the wild, beating heart of our state.

After two hours that felt like minutes, I returned to dry land with a changed idea about Florida and about the Everglades, more respectful than ever of its feral beauty. We did make it to the gallery and bought a photograph entitled “Moonrise” from Butcher’s Everglades collection of Big Cypress National Preserve—one of our most treasured art pieces. We met Clyde Butcher, and he signed our photo. Every time I look at it, I think back on that day when, bathed in silence, wading through cool water, staring up at the cypress trees and those piles of clouds, I understood Florida for the very  first time.

I don’t remember which fabulous South Beach restaurants or hot dance clubs we visited, or which opulent hotel we stayed at that weekend. (No, it wasn’t that debauched!) Those details are lost in a blur of many other weekends just like that.

But the two hours in the Everglades stay with me: the tranquility, the sound of my breath, the cool water. It was an experience unlike any other, in a place unlike any other. Prior to that day, the word “swamp” suggested a dark and murky place, something filled with dangers. I know the swamp now as something mystical, possessing an almost sacred beauty, a place to be cherished and protected.

I come from a place where humans rule, industry dominates, and nature gets beaten back as skyscrapers reach for the clouds. A city is awe-inspiring to be sure, a testament to what people can do. But Big Cypress, like the hurricanes that ravaged Florida that year, reminds us that although the things we make will crumble and fall, this wild place will remain. 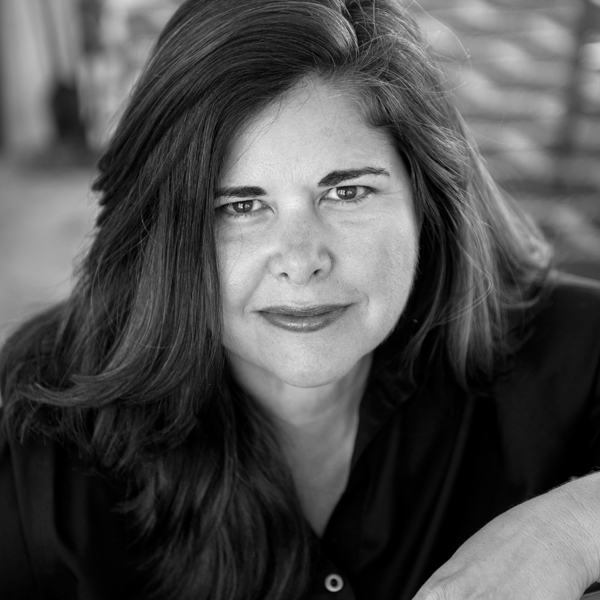 Lisa Unger is the New York Times bestselling, award-winning author of fifteen novels, including her latest thriller, The Red Hunter (Simon & Schuster). Her essays have appeared in The Wall Street Journal and Travel + Leisure. Unger lives in the Tampa Bay area with her husband, daughter and labradoodle.

Diane Roberts takes us on a trip down U.S. Highway 90 in Northwest Florida to her homeplace, painting a picture of the...

The unexpected obstacle to her jet-set lifestyle, and how she rediscovered her love of...

In our latest edition, we're sending civilians to space, picking up our pickleball paddles, and getting serious about...