Road-trip-worthy events and things to do in Florida

Live music fans don’t need to worry about the infamous hot and stormy Florida summers when coming to Jax for a one-of-a-kind concert experience. Daily’s Place, a new, modern multipurpose space, situated on the breezy banks of the St. Johns river, operates as a 94,000-square-foot practice facility for the Jacksonville Jaguars by day and a covered 5,500-seat amphitheater by night. Better still, each seat provides a fantastic sight line to the stage. The Daily’s Place summer launch and inaugural lineup includes Third Eye Blind, Diana Ross, Journey, and Lady Antebellum. Then, as the fall rolls in, the Jaguars concert series roars through North Florida with a performance every weekend of a home game. dailysplace.com

Blue Angels on a mission to entertain thousands of fans at the Pensacola Beach Airshow; photography by Visit Pensacola

The Pensacola Beach Airshow welcomes hometown heroes the Blue Angels and 100,000 of their closest fans and friends again this summer. The U.S. Navy’s elite demonstration flight team and their F/A-18 Hornets perform thrilling stunts and thunder through the Panhandle’s skies at speeds as fast as 700 mph. Head to Casino Beach for the best views of the aerial action. Revelers wear red, white and blue or the Angels’ signature colors, blue and yellow. Sunscreen and gallons of water are a must. Friday and Saturday’s shows start with citizen pilots at noon. “This is Pensacola Beach’s favorite event of the year,” says Visit Pensacola’s Nicole Stacey. visitpensacola.com

The highly anticipated Ancient City Game Fish Challenge takes place over four days at the Camachee Cove Yacht Harbor each year. Now in its 29th year, this family-friendly event features competitions for both Kingfish fishing (offshore) and redfish fishing (inshore) and coveted prizes of up to $10,000. All are welcome to check out the Captain’s party on Friday night and the awards ceremony on Sunday evening. The Ancient City Game Fish Association, the event’s host, has been promoting the sport since 1958, because, simply put, they’d rather be fishing. acgfa.com

History, celebration, and Floridian quirkiness collide at this beloved festival honoring a tree-climbing marsupial. Nicknamed the Possum Capital of the World, Wausau is celebrating the Festival’s 48th year. Locals credit the possum population for helping residents survive the Great Depression (they were a source of food and fur). Join 4,000 guests for the parade and get ready for some rooster crowin’, hog callin’ and cow lowin’. Expand your palate with the possum stew as you watch the crowning of the Wausau Possum King and Queen. Close out the day with some spirited square dancing—but be prepared to sweat, as the festival always seems to fall on the hottest day of the year. wausaupossumfestival.com

Tampa-based Noelle Mason’s installation Love Letters/White Flag: The Book of God knocked the breath out of judges, journalists and visitors to the Orlando Museum of Art last summer, winning one of the state’s top cultural honors, the Florida Prize in Contemporary Art. Mason’s work covered two gallery walls with dozens of white vintage handkerchiefs, each one cross-stitched with writings and drawings taken from the journals of Eric Harris, one of the Columbine shooters. The Florida Prize Exhibition, now in its fourth year, recognizes ten Florida-based stand-outs in the contemporary art scene in mediums including photography, painting, sculpture and mixed media. Both provocative and social, the exhibition’s preview party (complete with live music, fine food and craft cocktails) raises funds for the winner. The fete takes place on June 2, and you won’t want to miss this year’s nominees. omart.org

THE BADDEST BBQ ON THE BONE FISHING SLAM

Between fifty BBQ vendors, pig races, kids’ activities, musical performances and a whole lot of fishing, it’s no wonder that more than 20,000 people eagerly descend on the The Baddest BBQ on the Bone Fishing Slam, put on by the Old Salt Fishing Foundation. Thursday night’s Captains Meeting and BBQ Festival kicks off the weekend and includes a silent auction, raffle prizes, and more than sixty art merchants. The free children’s fishing tournament on Friday precedes Saturday’s in-shore and off-shore competitions. With twelve different divisions ranging from trout to mackerel, anyone with a rod can compete for cash prizes. For the landlubbers, a pro-am BBQ showdown determines who will become the top—ahem—hog of the grill. oldsaltfishing.org

Florida wine? Yes, you read that right. More than two dozen wineries produce a variety of vintages across the state. And summer time means crush season. Forget Tuscany—smash some grapes under your bare feet at the Lakeridge Winery & Vineyards Harvest Festival in Clermont. The versatile muscadine grapes grown in Central Florida produce Southern Red and Southern White blends that locals love. During the festival, the 127-acre Lakeridge estate rocks with live music, vineyard tours, a wine and cheese bar and an artisan village of 80 crafters to wander while swirling a glass (or three) of Sunblush, Lakeridge’s muscadine version of rosé. lakeridgewinery.com

In game action from the Bay Area Showdown; photography by Anthony Brown

Hoop dreams come true at the Bay Area Showdown. The five-versus-five tournament brings NBA-level competition to Tampa and lets everyday ballers play against current and former professional athletes like John Henson of the Milwaukee Bucks and Sunshine State native Marreese “Mo” Speights of the LA Clippers. The double-elimination series tips off at Tampa Catholic High School and attracts hoops enthusiasts from around the state and beyond—all hoping to bring home the win and the ten-thousand-dollar cash prize. There’s also a cause behind the competition: The showdown was started in 2012 to give back to the community and raise proceeds for the Brandon Bolts, a local youth basketball program, along with other charitable organizations. bayareashowdown.com

What’s a Lionfish Derby? This competition is designed to collect and remove as many lionfish as possible. Lionfish (also known as zebrafish and butterfly cod due to their stripes and fanned fins) may be pretty, but this non-native species wreaks havoc on reefs, preying on small native fish and poisoning larger species with its venom. Lionfish were released from aquariums into the wild in the ’80s and have flourished in the state’s tropical waters. Each derby, held at the John Pennekamp Coral Reef State Park, helps reduce the population and provide data to help further research and awareness. Cast a rod and compete or simply watch and eat. reef.org

Miami Spice Mash-Up/Mix-Ups, a series of intimate dinners, are back as an appetizer to the 16th annual Miami Spice restaurant months. Guests of these smaller-scale, exclusive foodie fusions will experience a three-course meal created by two chefs from some of the Magic City’s top restaurants. Last year, one of the Mash-Up/Mix Up pairings featured James Beard semi-finalist Brad Kilgore of Alter and Brian Nasajon of Beaker & Gray, who joined forces at a location in Wynwood. This year’s white-coat collaborations promise to be even more fabulous with unexpected dynamic duos. ilovemiamispice.com 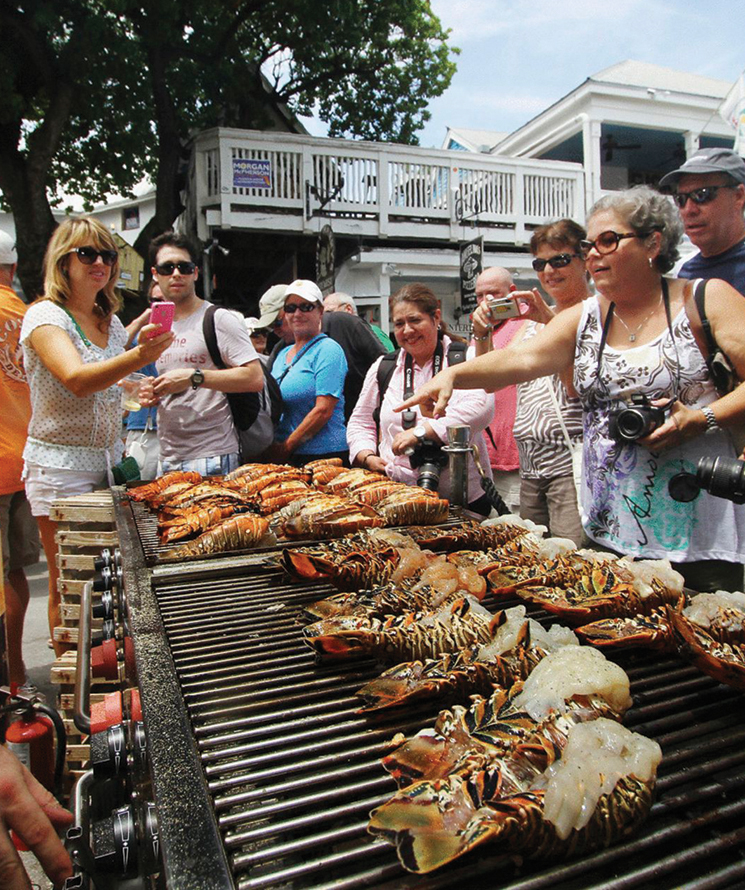 Key West Lobsterfest’s signature crustaceans lined up on the grill; photography by Lobsterfest

Grab your tickle stick and head south for foraging and feasting on Florida lobster. The 21st annual Lobsterfest kicks off the state’s lobster season, beginning with a bug boil at the Sunset Tiki Bar and Grill in Key West. The crustacean celebration continues with a catamaran sail and snorkel trip, followed by a pub crawl. The weekend culminates with the event’s famous street fair. Stroll Duval Street listening to live local bands like The Durtbags while claw-clad festival-goers sip cold beers and savor fresh-off-the-boat dishes like fried lobster fritters and grilled lobster tail from area restaurants. keywestlobsterfest.com