On the Water, Pursuits

The Rod and Girl Club

In the ultimate girls' fishing getaway, these lady anglers run boats, spear fish, land lobsters and hope to pass along their love of the sea to their daughters. 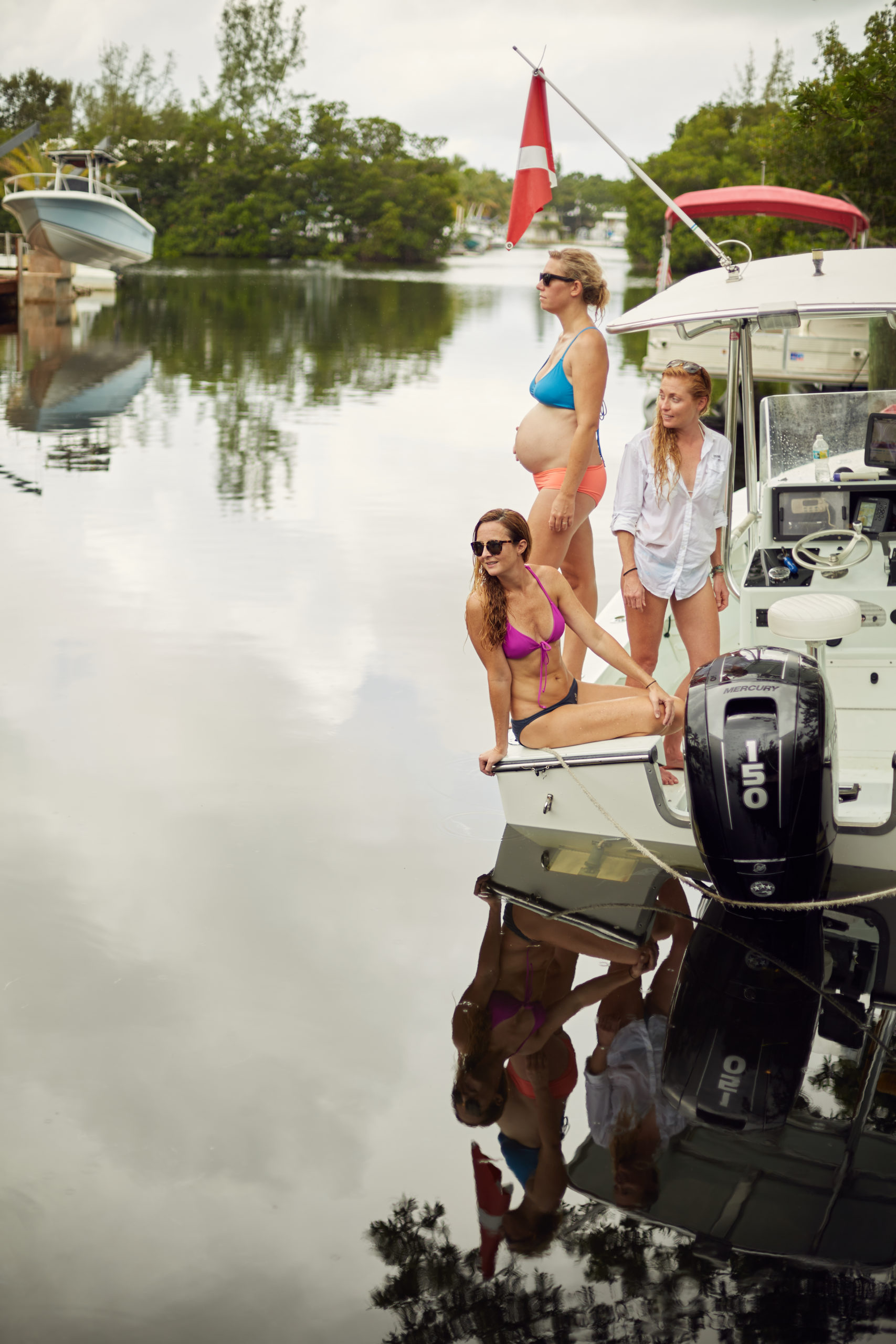 Three lady anglers, savoring the sunrise as they cast off from Brooke Lavelle’s dock in Key Largo.

Five hours into a multi-course, homemade meal of watermelon salad, fried lobster and panko-encrusted yellowtail, chased with craft beer, jovial conversation and spirited rounds of Cards Against Humanity (an R-rated word association game), Brooke Lavelle’s iPhone abruptly quits playing her Sublime Pandora station. The screen shows the familiar prompt “Are you still listening?” that appears when fun distracts her from actively evaluating songs. It also reveals the time (1:45 a.m.). Six months pregnant with her second child and the ringleader of the feisty female foursome gathered at her weekend Key Largo home, she shuts down the revelry and sends her friends to bed, lest they miss their 6 a.m. wakeup call to go fishing and lobstering.

Due to last night’s overindulgence, the group oversleeps, but only by half an hour. The women make up for it by hurriedly dressing in swimsuits, shorts and lightweight tops, guzzling some coffee and grabbing a piece of fruit. Just as the cotton candy-like sunrise streams into the house, they’re trotting downstairs toward the dock.

“This isn’t a typical Saturday,” Lavelle says, “at least not during lobster season” (August 6 through March 31). Usually, around midnight, Lavelle and crew find shallow water and go bully netting with a 6-foot-long, wide-mouth web and special lights—used to spot crustaceans crawling out of their holes then cover, drag and scoop ‘em out of the water. They’re often out on the boat until the wee hours and in bed until late morning.

“I have dozens of female friends who love to fish, lobster, shrimp, snorkel, dive, etc. We don’t need our husbands or boyfriends holding our hands to do any of it.”
—Brooke Lavelle

This Saturday, August 27, they’re altering their routine due to a ferocious-looking storm system. It’s what will become a hurricane and hit Florida’s big bend six days later. The forecast would inspire many people to call off the trip, but these women, all in their mid-30s, know how difficult it can be to reschedule girls’ getaways amid family and work obligations and major life events (including one woman’s September wedding and Lavelle’s December due-date). With radar screens at the ready, they’re mindful of Mother Nature, but unwilling to let her preemptively rain on their lobstering and fishing parade.

Heading to The Florida Keys? Click here for the latest on COVID-19 safety. 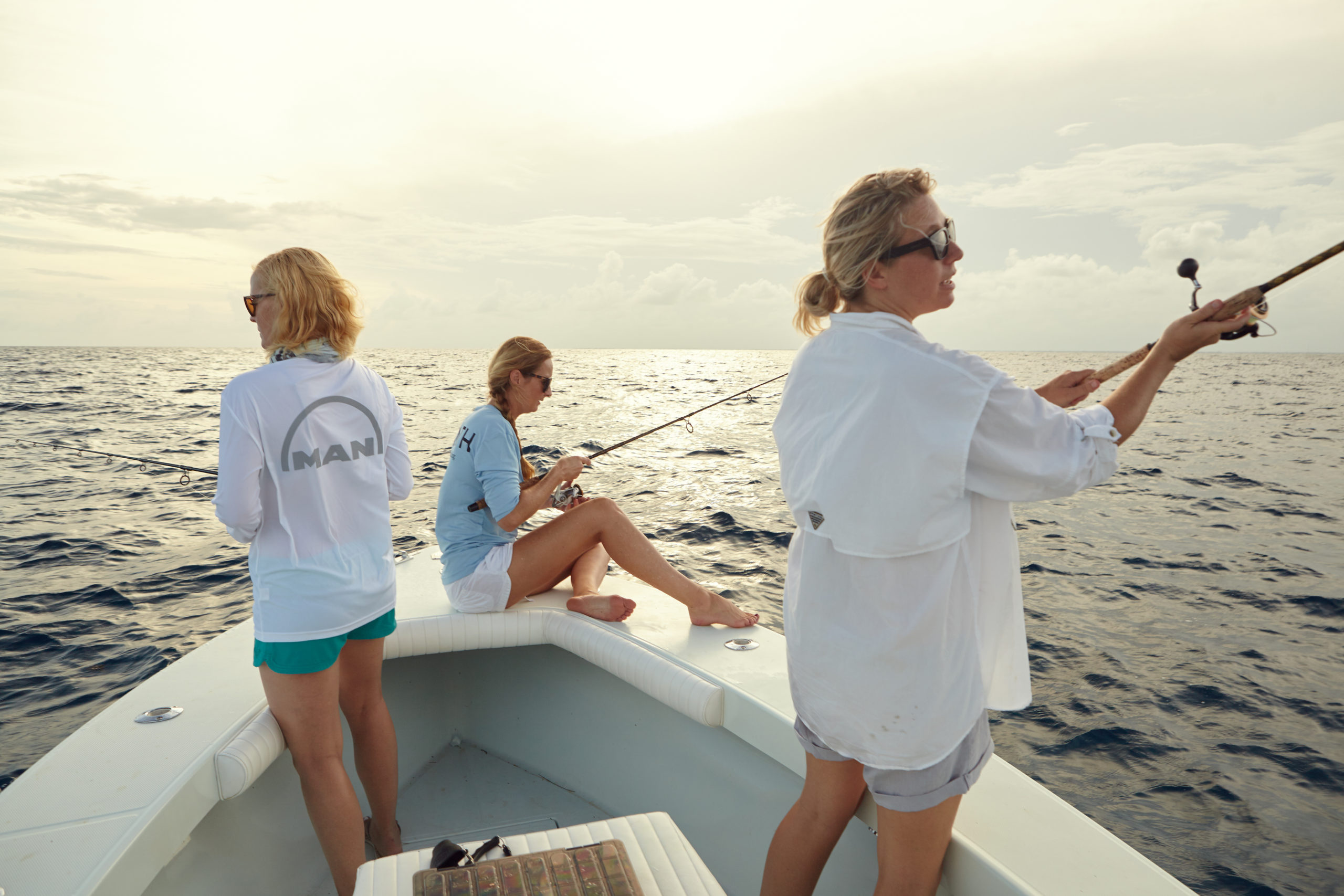 The friends hope to pass along their love of fishing and the water to their daughters.

By 7 a.m., the women are out on Lavelle’s 20-foot SeaCraft, cruising through Blackwater Sound toward Florida Bay. With the first splash of sea spray, they seem fully resurrected. “I love being the first one out on the water,” says Jenny Stein, a marine biologist in Marathon, inhaling a big breath of salty air.

That reverie is short-lived, however. Soon, they pass a boat packed with men who whistle then holler, “Where the guys at?” The afternoon before, they received similar catcalls from two other groups. “Ticks me off,” Lavelle says. “I have dozens of female friends who love to fish, lobster, shrimp, snorkel, dive, etc. We don’t need our husbands or boyfriends holding our hands to do any of it.”

Eager to revive the lighthearted mood, Autumn Bowe-Rhoads, a realtor in Palm Beach Gardens who’s adept with a rod, tickle stick and spear gun, fishes her iPod out of her dry bag. She picks a playlist (’90s hip hop), hits play and bobs her head as Young MC raps, this here’s a tale for all the fellas…

Growing up in Pompano Beach, Casey McLaughlin, now an insurance agent in Deerfield Beach, has been fishing almost as long as she’s been walking. “My mom taught me,” she says. On her phone, she carries evidence of her first catch: a scanned photo showing a grinning, towheaded toddler with a prize bass. 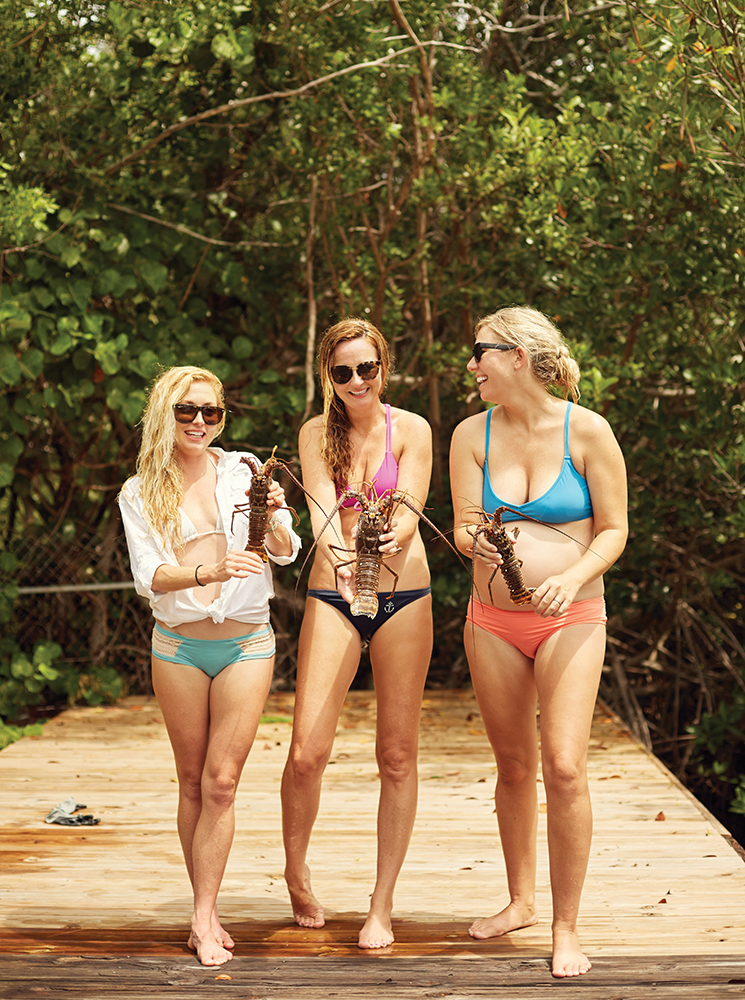 Stein, Bowe-Rhoads and Lavelle show off their catches.

A competitive angler vying to catch a record weight swordfish on a line with a breaking strength of six pounds, McLaughlin has entered tournaments throughout South Florida and the Keys since she was 18. Her all-time favorite is the Ladies Fish-Off, a women-only event in Lighthouse Point that raises money for oceanic organizations and local charities.

She’s hooked on the camaraderie. She has no qualms competing against men, “but nothing compares to spending time with girlfriends doing what you love most,” she says, while she spools her spinning reel. “That’s why weekends like this are so special.” 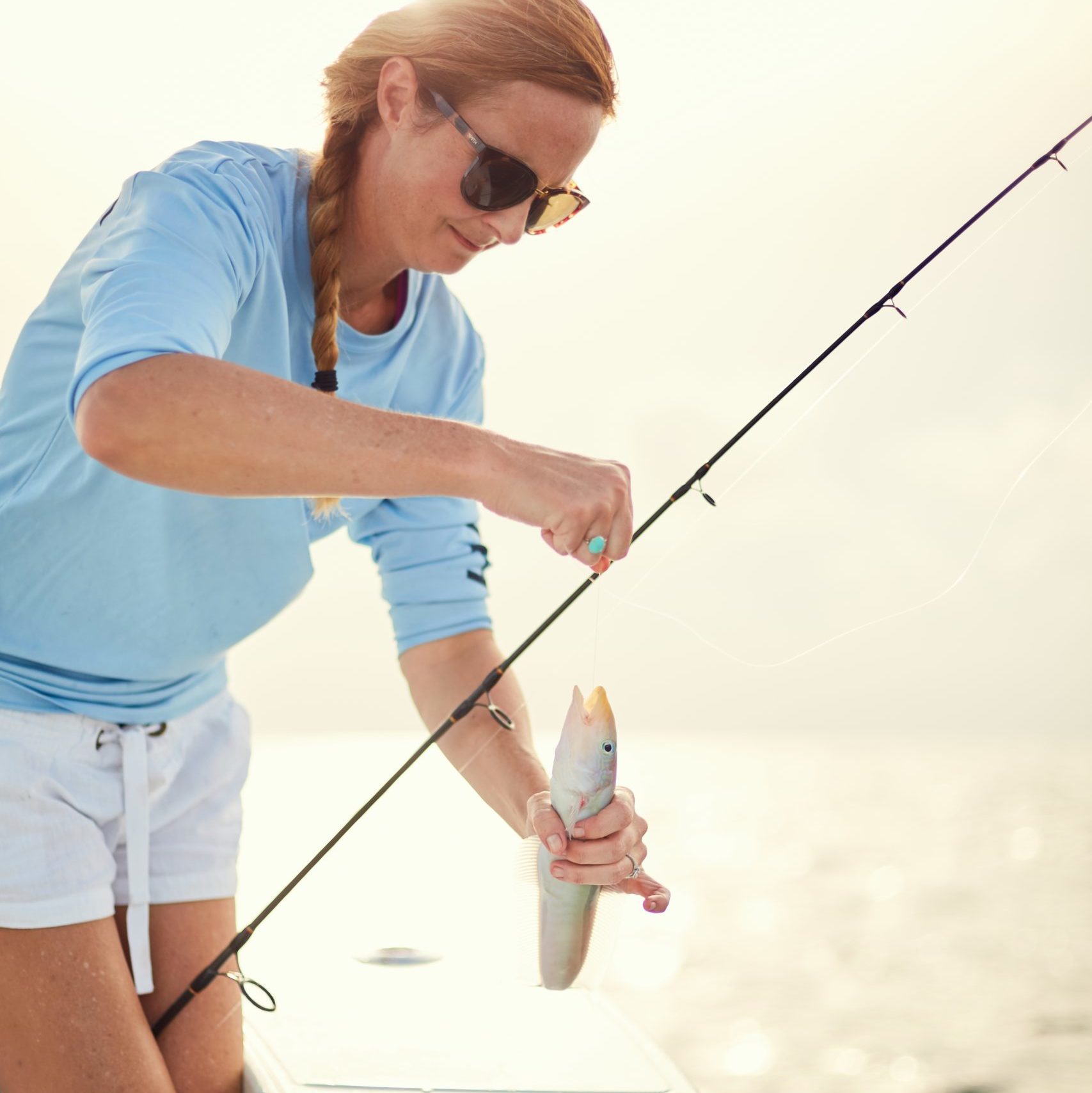 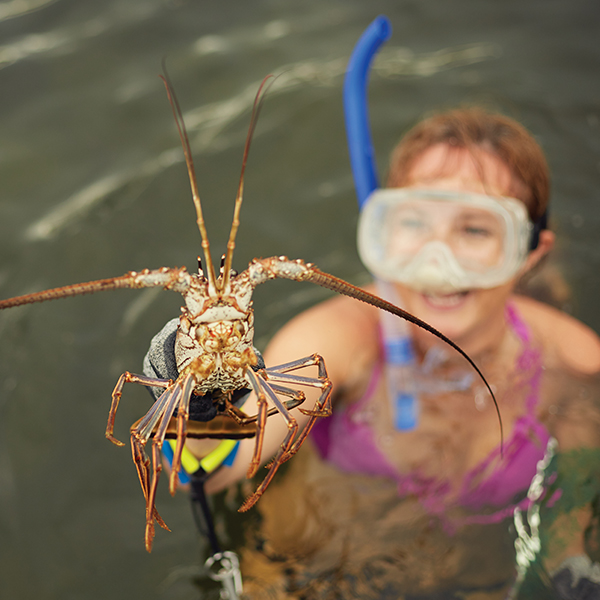 Bowe-Rhoads had a successful day on the water.

Statewide, there are just over 350,000 women with saltwater fishing licenses and nearly 90,000 with lobstering licenses, according to the Florida Fish and Wildlife Conservation Commission. Several of them hold world records “and numerous prestigious awards,” says Donna Wilson, president of the International Women’s Fishing Association, founded in 1955 in Palm Beach Gardens.

Proud to be part of this outdoorsy troop, Lavelle grew up lobstering with her uncle and brother. “My mother worried every time I got in the water,” she says. “She was convinced it was dangerous for women.”

Preaching that waterways are safe environments everyone should explore, Lavelle, a stay-at-home mother in Lighthouse Point, gives her 3-year-old daughter regular guided boat rides. “I call it ‘Ecology 101,’” she says. “We look at iguanas and fish. She can identify the difference between a sailfish and a swordfish.”

It’s Lavelle’s mission to empower her daughter (and baby no. 2) to feel capable on and in the water. Already, her daughter is a proficient swimmer who knows how to breathe out of a snorkel. On her last birthday, she asked her mom how much longer she has to wait to drive a boat.

“She shouldn’t be intimidated of stereotypically ‘guy’ activities,” Lavelle says. “I want her to know happiness comes from doing what she loves, be it traveling or fishing.”

McLaughlin has the same attitude rearing her own 3-year-old daughter. “I want her to appreciate the water and the creatures in it,” she says. “She got her first snapper this summer and couldn’t have been prouder. Her excitement brought me such joy.”

Additionally, McLaughlin wants her daughter to know it’s fun to get dirty and disheveled. “Fishing is not glamorous,” she says. “I have three piles of shirts at home: long sleeve, short sleeve and stained with fish guts.”

To this, Lavelle laughs and raises a block of frozen glass minnows she’s about to toss overboard. “Oh yeah! Chum is chic,” she says.

“And don’t forget the hair,” Bowe-Rhoads adds, motioning to her tangled mane. “Wind and salt water do it no favors.”

McLaughlin tells her friends she has a big communal bottle of leave-in conditioner in her dry bag. “That’s just another perk of boating with women,” Lavelle says. “We always come prepared!”

For aquatic adventurers, few places compare to the Florida Keys, the women insist.

A big reason is the Florida Reef, which extends roughly 150 miles from the Dry Tortugas up to about Soldier Key and is nearly four miles wide in some areas. 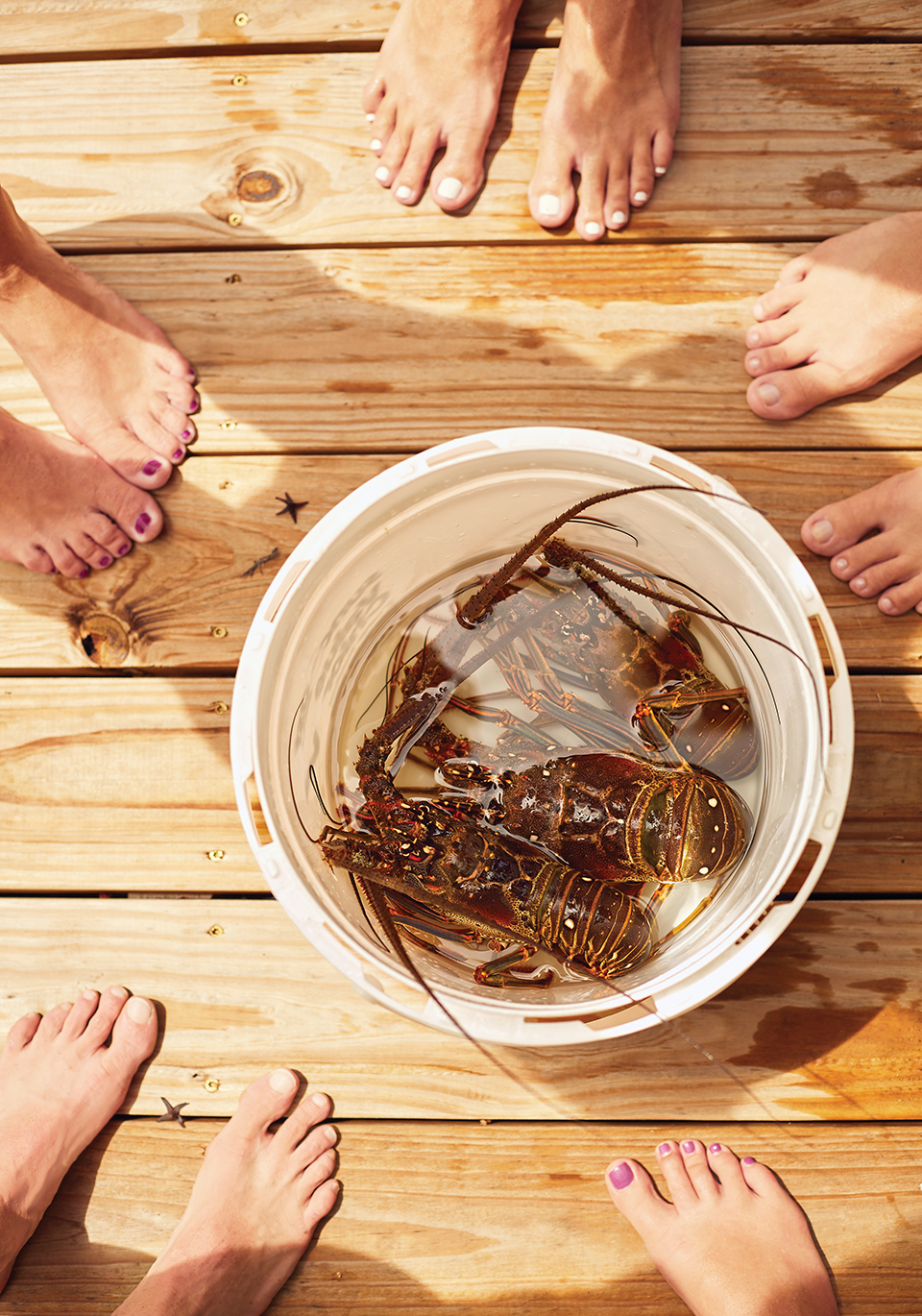 Nothing compares to spending time with girlfriends doing what you love most — Casey Mclaughlin.

Estimated to be 10,000 years old, the Florida Reef has 45 species of stony corals (the colorful types with a brain-like aesthetic) and “thousands upon thousands” of species of fauna, Stein says. “It’s like an underwater rainforest.” The reef’s biological diversity attracts organisms of all shapes and sizes, from shrimp and snails to grouper and sharks. Legions of lobsters burrow in the reef, as well as in shipwrecks, craters and ledges along the Keys’ many shallow, rocky surfaces.

Except for restricted areas, the Florida Reef is excellent for spearfishing, one of Bowe-Rhoads’s favorite pastimes. She took it up about 10 years ago, intrigued by some guy friends she saw do it on freediving and scuba trips.

“There’s a tomboy side of me that always wants to do what the boys are doing,” she says of her initial interest.

Her friends taught her to load a spear gun, stalk a fish, aim, unstring her catch and carry it back to the boat. “It took a lot of practice, exercises to build up my arm strength and many spears in the sand, but I had such a high when I finally got a fish,” she says.

She loves the intimacy of spearfishing. “You’re face-to-face with a fish, so you know exactly what you’re about to catch and how big it is, which is great from a conservation standpoint,” she says, explaining that, on a boat, you can’t know for sure if the fish biting your line is a protected species, like goliath grouper (which can grow to be more than 600 pounds). “If you pull one to the surface, it could die.”

There’s also adrenaline-fueled appeal, as a speared fish is like a dinner bell to sharks. (Her trick to ward off predators: “get vertical and make jabbing motions with your spear.”) Bowe-Rhoads describes her new, more intense passion as “a natural progression.”

“When you’ve been fishing forever, you look for new ways to do it,” she explains.

McLaughlin shakes her head “no” with conviction. She prefers staying on the surface, “away from sharks.”

As a sport fisher, she’s drawn to the Keys’ many seamounts or humps. These underwater mountains force water to funnel around them, creating a current that draws baitfish to the surface, pursued by big gamefish, such as dolphin, wahoo, tuna, amberjack and marlin.

When dedicating a day to lobstering, the group typically catches the limit (six per person), Lavelle says. Today, they manage only three before a rumbling charcoal sky drives them home a little before noon.

This has no bearing on their dispositions, still buoyant and bouncing to the ’90s tunes. Their husbands might appraise a trip by their haul, but these ladies define success differently. The captain, resting a hand on her growing belly, smiles and thanks the women for joining her for the girls’ weekend. “Hanging out on a boat with your close friends—how could that be anything but good?”

NO BOAT?
NO EQUIPMENT?
NO EXPERIENCE?
NO PROBLEM! 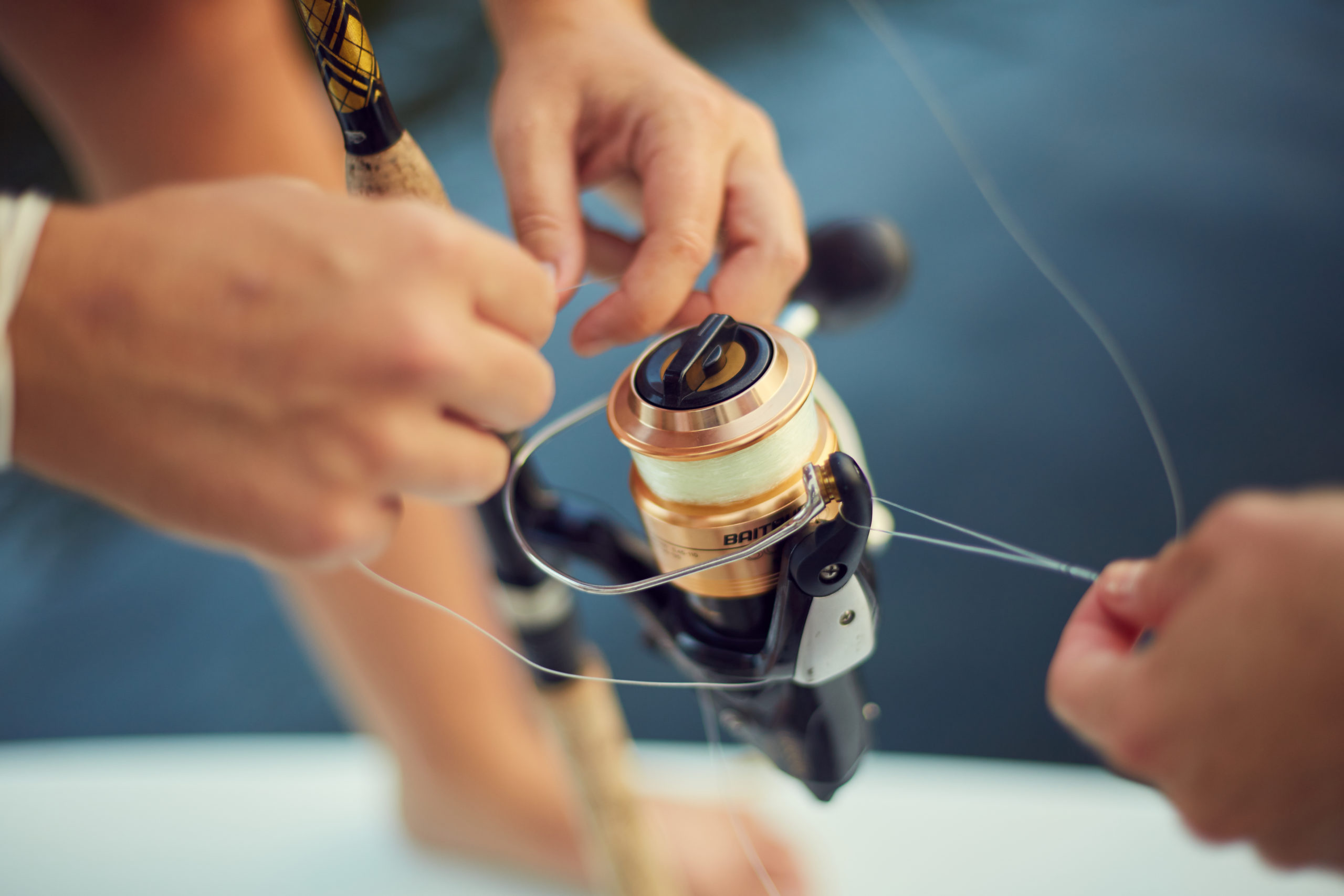 Our fishing sisterhood says it’s easy to find a good lobstering instructor in the Keys, just by going in to the local dive shops. But for ladies who need a more concrete plan or a different location, here are two ways to get hooked on watery pursuits

During weekend workshops held around the state, captains teach novice anglers the basics, like how to attach a lure and how to back up a trailer. This “hands-on, no yelling” program includes a party and a trip on a charter boat and strives to connect like-minded women, says founder Betty Bauman. ladiesletsgofishing.com

Photography by Mary Beth Koeth. This story originally appeared in the Fall 2016 issue of Flamingo.

This Fearless Floridian is Breaking the Stereotype Around Black Surfers

Deyona Burton braves the waves—and other people's ignorance—to connect with a sea that has shaped Black...

Ready For Takeoff? Here’s Who Can Launch You to Outer Space.

From a gentle balloon ride to an airplane that surpasses the speed of sound, there are out-of-this-world options for...