The competition is fierce, and we’re not even talking about what’s happening on the gridiron. As Florida’s three NFL teams—the Dolphins, the Jags and the Bucs—have vacillated up and down the league rankings in recent years, frustrated fans have left the stands and begun to watch the games on their big screens at home. The team owners, however, have worked hard to entice the crowds of big spenders back into the stadiums, upping the glam factor as only Floridians can. Once confined to executive suites, well-heeled football fans can now experience the action in even greater velvet-rope opulence, including everything from swimming pools and speakeasy-style clubs to lounge seating at the 50-yard line and gourmet restaurants.

When Samuel Yeboah bought season tickets to the 72 Club last year, the South Florida attorney and Miami Dolphins fan already knew a thing or two about luxury. Hard Rock Stadium’s ultra-premium seating section offered plenty of familiar accommodations—plush seats, gourmet dining options, and in-seat drink service. But, after he stepped inside the arena to find his way to his seat, it hit him. “You’re right there on the field,” he recalled, smiling, with a hint of delighted disbelief, at the location of his seat—at the 50-yard line, just behind the bench. “It’s so close it feels like you can talk to the players and coaches. That right there was a wow moment, even for me!”

Explore the best places to eat, stay and shop in these NFL cities

Over the last two years, the stadium, home to the Miami Hurricanes, the Orange Bowl and a variety of other sports and entertainment events in addition to Dolphins games, has undergone a $500 million renovation. The project, paid for by Dolphins owner Stephen Ross, has brought some serious bling to the already commanding structure, including new high-definition video boards, a roof over the main seating areas, high-end clubs and premium seating in areas previously off-limits to fans.

The luxury sector was the principal focus of the additions, said Jeremy Walls, the Dolphins’ chief marketing officer. Each private club has a unique identity. The 72 Club’s lounge, for instance, was inspired by Miami Beach’s Soho Beach House hotel and features locally made food and a high-end bar. The Atos and Ford field clubs, located behind the east and west end zones respectively, “have more of a speakeasy feel,” Walls said. The stadium’s newest club and, according to Walls, the highlight of this year’s season, is  Nine, whose members enjoy a private lounge and open-air suites reminiscent of a yacht deck. Perks also include pregame field access, a personal concierge, two Super Bowl tickets and an annual dinner with legendary quarterback Dan Marino.

Mixologist whips up a drink in Nine. Photography Miami Dolphins

Yet, for all the luxury, extravagant lounges aren’t all that make the stadium’s upgrades unique. “Our goal was to make the stadium a global entertainment destination, and not just for football,” said Walls. “The idea was to create experiences that had never been created in sports.” Among the stadium’s new services are a town car service to shuttle premium ticketholders between home and stadium and a private parking entrance for the high rollers who do drive themselves. “Time is the most valuable thing to our customers,” Walls said. “We made getting here easier, better and faster.”

Dolphins management paid just as much attention to what happens within the stadium. Rather than hiring an outside contractor to provide ushers and other customer-service employees, “we brought everyone in-house, and we hired a consultant, formerly of the Ritz-Carlton, to train employees in how to deliver the best service. We want people to feel the difference in every interaction,” Walls said. The Dolphins also partnered with Uber to carve out a designated area for the ride-hailing service to pick up and drop off patrons. For those who do take advantage of that option, there’s an exclusive tailgate zone complete with tents, coolers stocked with meat and beverages and grills waiting to be fired up. 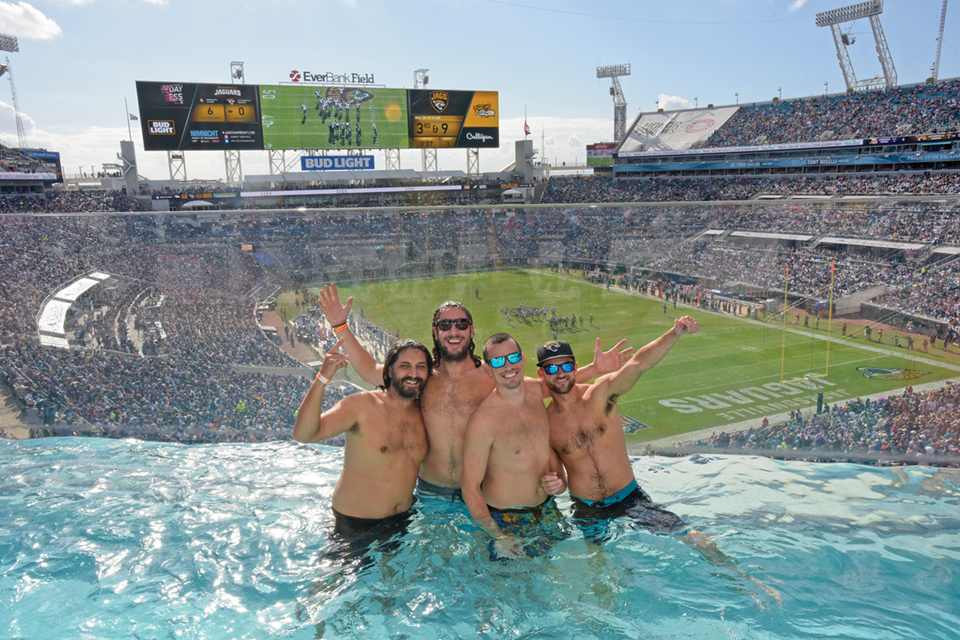 Perched on the banks of the St. Johns River, Jacksonville’s EverBank Field has undergone a $170 million transformation over the last five years, driven by Shahid Khan, the self-made billionaire who owns the Jaguars. In partnership with the city of Jacksonville, the Jaguars revamped the stadium’s club seats, installed what were then the league’s largest video boards, and built a 5,000-seat amphitheater, Daily’s Place. Of all the changes, none is more uniquely Florida than the two spa pools and 16 cabanas located in the stadium’s upper deck. Finally, bikini-clad fans can stand in a crystal-clear pool, margarita in hand, and watch two teams duke it out. “When we installed them a few years ago, we got a lot of flak. But, they’ve been sold out for every game since then,” said David Altman, the Jaguars’ senior manager of suites.

Longtime Jags fan John DeRemer may not be taking a dip in those waters, but his experience at the game is special nonetheless. His seats are in the US Assure Club. Renovated just last year, the complex offers fans a choice between refined, country-club style accommodations and a rowdier space with a sports bar vibe. Both parts of the club boast a culinary spread that comprises everything from Peterbrooke chocolates and Intuition Ale Works craft beer to gourmet versions of game day faves such as pizza, burgers and hot dogs. Yet it’s the energy and enthusiasm from fellow fans that really make game-day special, DeRemer said. “I’ve been to a lot of away games and seen a lot of other stadiums, and I think Jacksonville is very unique. In many ways, we fly under the radar, and people dismiss us as a football town,” he said. “But the passion for the Jaguars is very, very high!”  One of his favorite features of the stadium is the club’s expansive walk-out patio at the 50-yard line. “There’s nothing like standing there and watching the field,” he said.

As Jaguars players and fans prepare for the 2017 season with high hopes for a change in their fortunes, the team’s management is planning to roll out even more amenities, including the remodeled Fields Auto Group Terrace Suite, a  21,000-square-foot luxury club above the south end zone, appointed with extra-wide seats, air-conditioned dining areas and lounges, and panoramic views of the field and amphitheater. “We want you to drive here, park and not have to work one bit to have all the nuanced, warm comforts of home,” said Altman.

The Jags’ ambitious plans for their stadium are just a small part of their owner’s broader effort to revitalize Jacksonville’s downtown. Khan has become the city’s biggest fan. The tycoon’s proposal to develop the vacant riverfront shipyards located near the stadium was recently approved by Jacksonville’s Downtown Investment Authority. If you find your way to the city for a game, you’ll get a glimpse of the building of Florida’s next great metropolis.

It was, to say the least, a happy surprise. In May 2016, after competing against New Orleans, Atlanta, Miami and Los Angeles for the honor of hosting the Super Bowl in 2019–21, the Tampa Bay Buccaneers learned they had not been selected. The NFL announced that Atlanta, Miami, and Los Angeles would be the sites of the Super Bowl in 2019, 2020 and 2021, respectively. “It was disappointing, of course, but we also knew it wasn’t a matter of if but when we would get it. We just had to wait it out,” said Brian Ford, the Bucs’ chief operating officer.

Ford could not have imagined just how quickly that wait would end. One year after the initial announcement, the NFL unanimously voted to move Super Bowl 55 from Los Angeles to Tampa. Cigar City’s Raymond James Stadium was back in the game. Before it’s official, the NFL will have to confirm the decision, but Ford remains confident: “We don’t think there’s a better destination [for the Super Bowl] than our city and our stadium.”

It’s not as bold a claim as it might seem. Since 2014, Ford has overseen a $150 million stadium makeover, the venue’s first renovation since its 1998 debut. The changes include everything from reimagined concession stands to high-definition video boards and lavish suites. The Bucs’ management team was guided by a focus on making “the game day experience better for everyone, from the person sitting in the upper deck to the one in the luxury suite or the end zone. We asked ourselves, ‘What can we do to make this better for as many people as possible?’” said Ford. 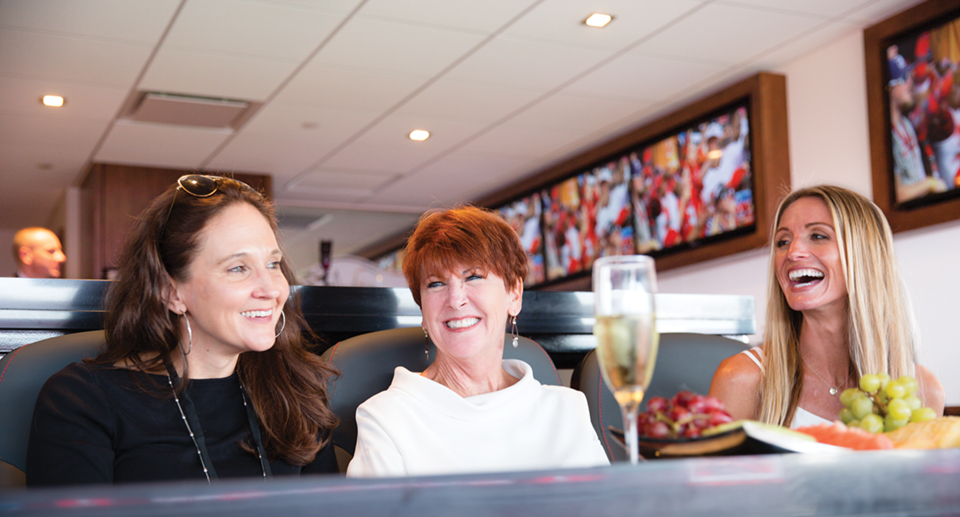 The improvements have been praised by loyal fans like Wendy Capelin, a retired pediatric nurse and self-described Giants fan from birth, who transferred her loyalties shortly after moving to the area in 2007.  One of the first in the door on game day, Capelin says she’s a true football fan, “not one of those people on their phone during a play, more worried about the beer and the socializing.” When she heard about the new Hall of Fame Club, she bought the tickets, and, “when I sat there for the first game, it was like being on the field—it was phenomenal! The sound system and the video are so good. I can hear everything they’re saying and I can actually see the hand signals,” she said. As present as she is for the action on the field, she finds the amenities inside the club just as alluring. “When I am there, I feel like I’m at the Four Seasons of football. Like I’ve arrived and this is exactly where I need to be for the next five hours.”

The redesigned West Stadium Club debuts this season. After expanding to 60,000 square feet, the club will have room for new premium bars, dining options and a team shop with exclusive Buccaneers merchandise. A cadre of concierges will roam the area, ensuring patrons’ game-day desires are fulfilled. Almost any, that is. “As much as we’d like to control what happens on the field, we can’t,” Ford admits. But, he adds, “We know our guests’ good time can’t be dependent on a win. We want to make sure that whatever happens, we exceed your expectations, that the experience is fun, memorable and second-to-none.” 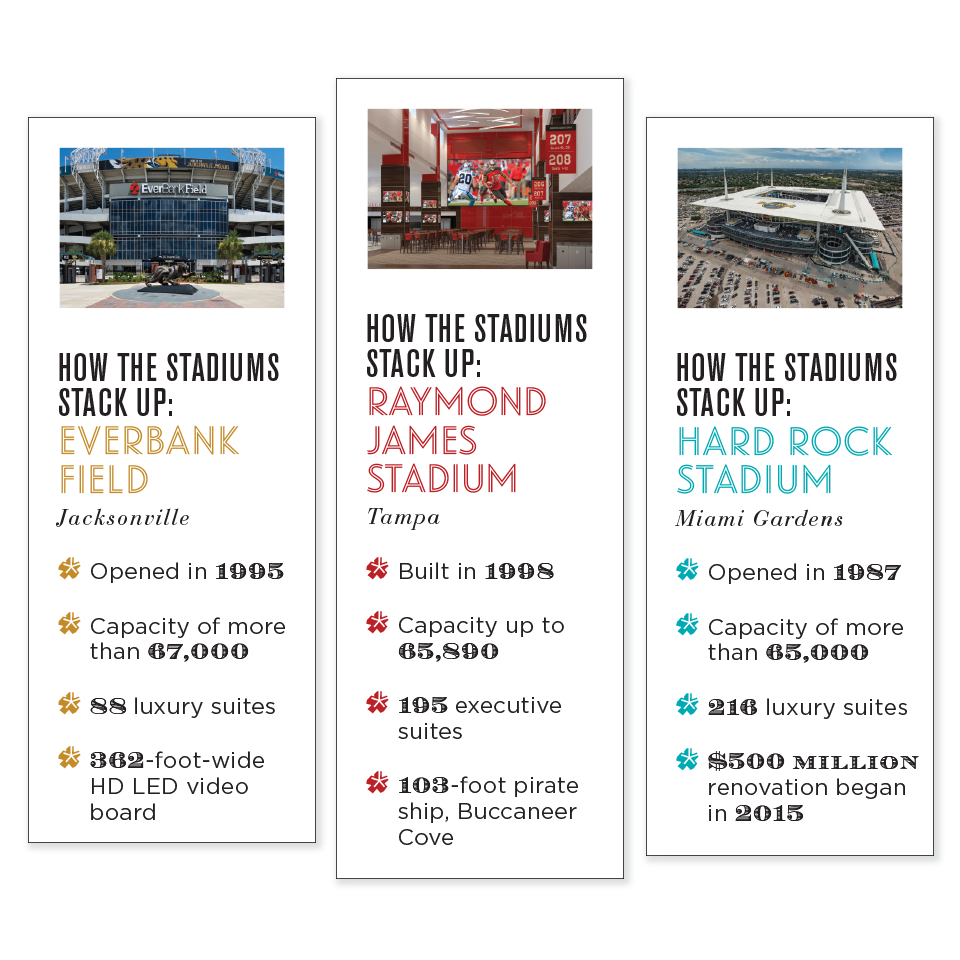 Explore the best places to eat, stay and shop in these NFL cities

Ready For Takeoff? Here’s Who Can Launch You to Outer Space.

From a gentle balloon ride to an airplane that surpasses the speed of sound, there are out-of-this-world options for...

This Mother-Daughter Duo is Dominating the Pickleball Scene

South Floridians Leigh and Anna Leigh Waters are changing the face of the game from a retiree favorite to the most...